(This is the first post of the series I plan to write on some tools I have built over the last couple of years to help me in my day-to-day tasks. I usually put all such tools in the repo toolbox until they turn out sufficiently useful to be worth separating into their own projects).

The first post is about a command line tool named histit.py that I use for quickly plotting histograms 1 by reading data from text files. It's basically a simple wrapper over matplotlib, a library that's quite popular for plotting all kinds of stuff in Python.

hisit.py depends upon numpy and matplotlib so first make sure they are installed 2

We need some data for the demo, so let's first dump values from a random normal distribution into a text file. The numpy.random.normal function can be used for this.

Now we can use histit.py to plot the histogram as follows:

If all goes well, a window 3 will popout with the histogram as shown below. Although the values in your case would be different, a peculiar "bell curve" should be noticeable. 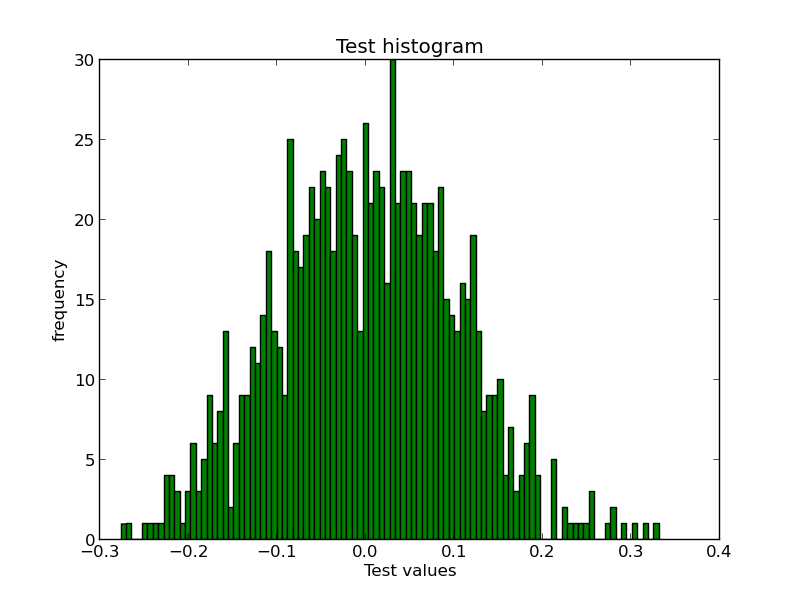 In the command we just run,

Instead of loading data from a file, the script can also accept data on the standard input stream in which case, the -d option must be skipped.

I have been using this on a regular basis for some time but I am not entirely convinced if it's worth publishing as a package on PyPI. Anyway, at least it's got some documentation now :-)

1. A histogram is a graphical representation of frequency distribution. In simpler words, a graph of all unique values in the data plotted against how many times each one appears. When working with sufficient quantity of data, a histogram turns out to be a pretty handy tool to guage the shape of the data at a glance. See also: wikipedia ↩

2. Actually it doesn't depend on numpy directly but before installing matplotlib make sure numpy is installed in order to avoid frustation. ↩

3. GTK window in my case as I am using the GTKAgg backend for matplotlib. Please consult the docs to configure your preferred backend. ↩